This article was originally written in November 2009 for Plugged In Lawyer, a blog about social media for lawyers.

It will be interesting to see what the future holds in store for desktop OS’s and apps, but I for one believe that we’re all moving online and Google is positioning itself beautifully to capitalize on that trend with its advertising revenue model.

Here are five ways that Chrome OS is different, courtesy of  Ben Parr at Mashable.com:

Mark my words, desktops and desktop applications are going the way of the T-Rex.

This is one cartoonist’s take on how Google views Microsoft (h/t to Mashable): 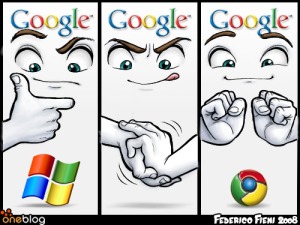 For a simple explanation of Chrome OS and how it works, check out the video below.

While there are some who think that Google is pushing its new OS simply to tap into the market of consumers waiting for cheap computers, I am personally somebody who can’t wait to tell the cell phone companies to take their smartphones and shove them.  I’ll be perfectly happy to carry a simple flip phone and a small netbook for my mobile computing needs.  I’m tired of squinting at my cell phone.  Take that, Microsoft!